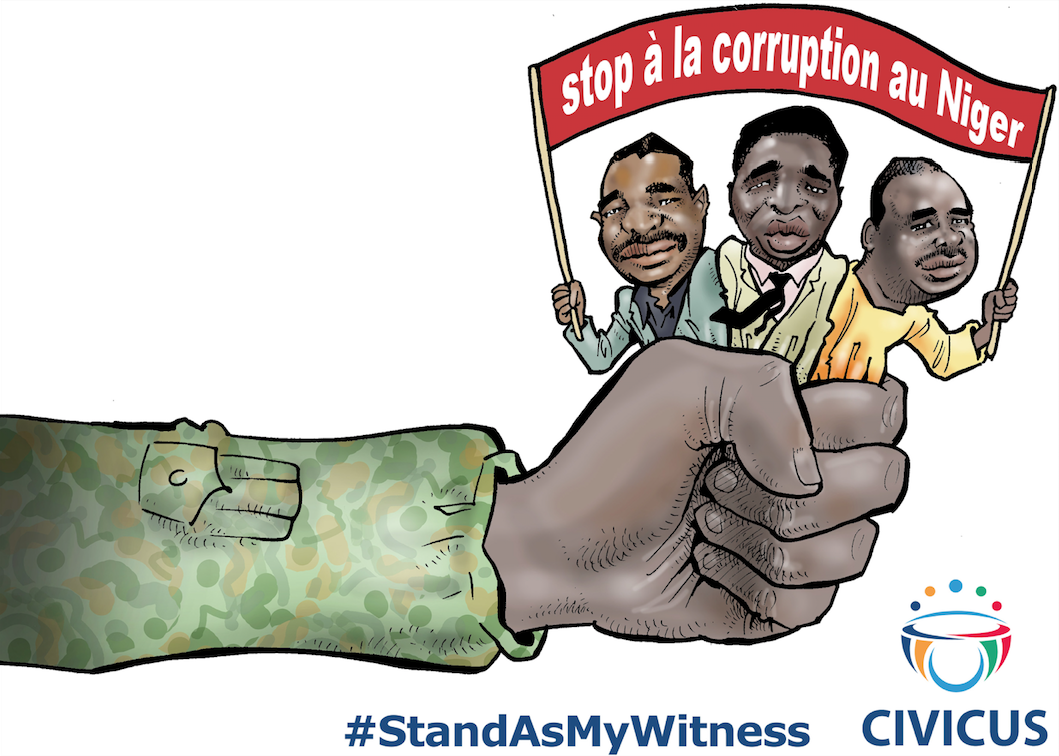 Three human rights defenders have been imprisoned in Niger for six months today, 15 September, for simply participating in peaceful demonstrations calling for an investigation into allegations of embezzlement by the Ministry of Defence.

CIVICUS, Amnesty International, Oxfam Niger, Publish What You Pay (PWYP), Turn the Page International (TLP) and Front Line Defenders are calling for the immediate and unconditional release of Moudi Moussa, Halidou Mounkaila and Maikoul Zodi. They were arrested between 15 and 17 March 2020 along with four other activists after security forces broke up peaceful demonstrations against corruption in the capital Niamey.

Two days before the demonstration, the authorities had banned it as a preventive measure against the COVID-19 pandemic. There was violence that left at least three people dead and several buildings damaged.

Charges against the three defenders include "organising an unauthorised rally, arson, damage to public property and manslaughter". On the day of the demonstration, at least 15 activists had been arrested, six of whom were in pre-trial detention.

Three of the detainees were provisionally released in May, but Moudi Moussa, Halidou Mounkaila and Maikoul Zodi are still being held arbitrarily despite being granted bail of 5 million francs (about US$9,200) on 6 August. The prosecutor successfully appealed against this decision and they are still being held in three separate prisons.

Moudi Moussa is a journalist and trade unionist, Halidou Mounkaila is the leader of the teachers' union SYNACEB and Maikoul Zodi is the national coordinator of the world movement Tournons La Page. These three human rights defenders are members of the PWYP coalition and are featured in the CIVICUS campaign #StandAsMyWitness, which raises public awareness about human rights defenders arbitrarily detained around the world and calls for their release. Amnesty International considers these three defenders to be prisoners of conscience and calls for their immediate and unconditional release.

The detention of human rights defenders takes place in a context of increasing repression of human rights and civic space in Niger. In June, the country was added to the CIVICUS watch list. This list highlights countries where there has been a recent rapid decline in human rights, including the rights to freedom of expression, peaceful assembly and association.

Human rights organisations are particularly concerned about the harassment, intimidation and attacks on human rights activists and defenders, including those calling for transparency and accountability in the public and private sectors. Journalists have also been arrested for reporting on allegations of corruption.

On 10 June 2020, journalist and blogger Samira Sabou was arrested in Niamey and charged with defamation in connection with a social networking post highlighting corruption. According to her fellow activists, her arrest is linked to a post of 26 May 2020 in which she referred to a defence ministry audit concerning the fraudulent purchase of military equipment for the army. One of the comments below the post criticised the president's son in connection with the audit, although Samira Sabou did not mention the son in her post. On 28 July, she was released by the Niamey high court for "unconstitutional offences" and was freed the same day.

On 12 July, journalist Ali Soumana was summoned by the police, interrogated and accused of false information for comments made on allegations of corruption. Some journalists were also arrested and detained for reporting on the authorities' response to COVID-19. In May the National Assembly enacted a new law that allows authorities to intercept telephone conversations as part of the state's response to counter terrorism and transnational crime without appropriate human rights safeguards, including the rights to freedom of speech and privacy.

"Over the past eight months we have witnessed an upsurge in human rights violations by the Nigerien authorities, including intimidation and harassment of human rights activists, defenders and journalists. It is a travesty that Moudi Moussa, Halidou Mounkaila and Maikoul Zodi are still in prison simply for protesting against alleged misuse of defence funds. They should all be released immediately and unconditionally," said David Kode, CIVICUS Advocacy and Campaigns Officer.

"We believe that the charges against the activists for complicity in damaging public property, arson and manslaughter are fabricated to undermine the peaceful exercise of their human rights and the demands for transparency and accountability," said Samira Daoud, Amnesty International's Regional Director for West and Central Africa.

The signatory organizations are concerned about the prolonged detention of human rights defenders on baseless charges. They call on the government of Niger to immediately release Moudi Moussa, Halidou Mounkaila and Maikoul Zodi and to stop persecuting members of civil society.

Niger is on the list of countries "blocked" by the CIVICUS Monitor, an online tool that monitors the conditions of civic space around the world.

CIVICUS is a global alliance of civil society organisations dedicated to strengthening citizen action and civil society worldwide. CIVICUS has over 10,000 members worldwide.

Amnesty International is a global movement of more than 7 million people who take injustice personally. We campaign for a world where human rights are accessible to all.

Publish What You Pay (PWYP) is a global movement of more than 1000 civil society organisations campaigning to ensure that oil, gas and mining revenues contribute to improving people's lives.

Tournons La Page is a movement composed of 250 organisations active in 10 African countries and in Europe to promote democratic changeover.