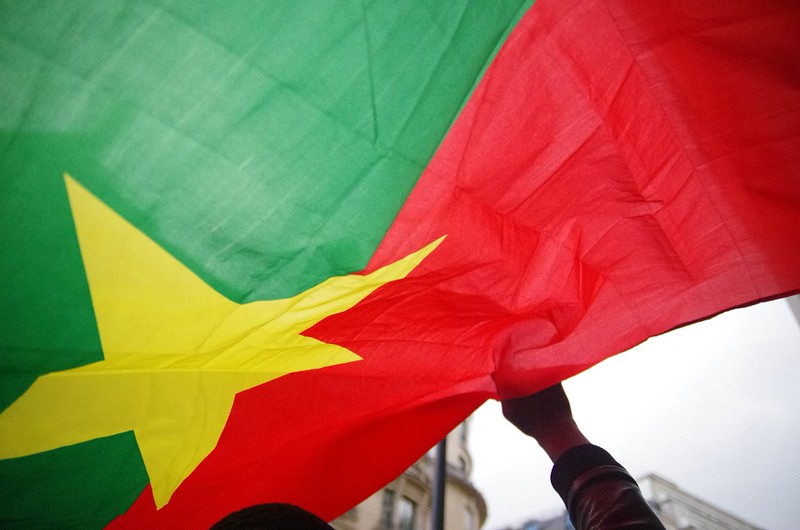 Africa is no exception – democracy cannot exist without peaceful transfer of power.

“Africa – continent of the future”. A hackneyed phrase, repeated by the political classes, the media and among economists on the international stage. But what kind of future are we talking about? One of foreign investment and a handful of powerful families? The international economy needs Africa and its potential but doesn’t need Africans (projected population of over 2 billion in 2050), made easier because their voices are muzzled.  Africans will only own their future if there is true democracy, and democracy can only exist with political changeover.

Transfer of power from father to son

Constitutions are generally the guarantee of political changeover. Limiting the number of mandates which can be held by one president is healthy, and is a measure adopted by the majority of African states. In some cases these provisions are embedded in inviolable texts. However, even such precautions have not prevented another number of heads of state to remain in power, for decades, though repeated violation of these enshrined principles of democracy and to the general indifference of media and public opinion around the world. In certain African states, dynasties have been born, where power is passed on from father to son. Twelve of the families holding the reins of power in Africa were already in that position in 1990. More than 87% of people in Gabon and Togo have never seen any change of family in head of state!

These regimes also receive the more or less tacit support of other states. They have managed to obtain international legitimacy, following the cold war, through careful manipulation of the terrorist threat. To the North, everything happens as if democracy was a luxury that African countries cannot afford. As a result of this African societies struggle to survive. Testimony to this is the political and military unrest which has shaken certain countries. Citizens who demonstrate to obtain change and to demand proper respect of the constitution and democracy pay a heavy price, through repression.

The wave of democracy however has not lost momentum. Attempts to secure another generation of the ruling dynasty in Senegal were scuppered by the ballot box, and in Tunisia and Egypt through the Arab revolution. The cry of “ENOUGH” heard in Dakar in 2012 sent ripples far beyond Senegal. In the streets of Maputo, Bujumbura, Libreville, Ouagadougou, and Algiers, a same cry of revolt and hope for change can be heard, along with the same refusal to allow the ruling dynasty to remain in power.

The threat of constitutional a ‘coup-d’état’

Constitutional change in the 1990’s led to many African countries to limit mandates and open the way to a multi-party system. Pressure from citizens tipped the balance and forced authoritarian regimes of the time to change, with the support of external democratic forces. Today the time has come for a new alliance between citizens of Africa and Europe to proceed to the next state: bring change alive.

The refusal to allow any constitutional change for personal gain is the first step. Although constitutional change in itself is not antidemocratic, using such change as a tool to perpetuate personal power could not be further from citizen expectations and the stated values of the international community in terms of promoting a state of law. Political stability and the fight against terrorism should not be claimed in vain. Everywhere in the world experience has taught us that democratic rules form the best antidote to political instability, armed conflict and terrorism. Political stability finds its roots in robust institutions – not in perpetuated dynastic rule.

And yet the threat of a constitutional coup d’état exists in 2015 in Burkina Faso in the form of Blaise Compaore and in Burundi with Pierre Nkurunziza, also in 2016 in Rwanda with Paul Kagame, in Congo with Denis Sassou Nguesso and RDC with Joseph Kabila. In the Togo, the ruling dynasty managed to remain in power in 2005 after fiddling the constitution, costing 800 lives. The heir to this position is presenting himself for a third mandate in contempt of political debate on constitutional reform and recommendations from the Truth, Justice and Reconciliation Commission.

Leaders who have a chance to change history

In these countries, presidents and their entourage behave in a way which leaves onlookers in no doubt about their intention to remain in power through constitutional gerrymandering. In the past, many heads of state in Africa betrayed their word: Gnassingbé Eyadema in Togo in 2002; Idriss Deby Itno, Chad in 2005; Paul Biya, Cameroun in 2008; Ismaïl Omar Guelleh, Djibouti in 2010; Yoweri Museveni, Uganda in 2010, Abdoulaye Wade, Senegal in 2012.

Others however have opted for change, following the steps of Jerry Rawlings of Ghana, Mathieu KérékouinBénin, Pinto da Costa in Sâo Tomé e Principe, and presidents Aristides Pereira, Antonio Mascarenhas and Pedro Pires who succeeded each other in the Cape Verde Islands.

Leaders tempted by the possibility of perpetuation their mandate should know they have the change to change history. By accepting change they hand power back to its real guardians: the people, in a final act of appeasement.

At the same time, the absence of international response to this situation leaves the African regimes in question free reign to impose, including with the use of violence, an intolerable change to their constitutions to maintain power. Leaving one leader pursue this betrayal is the breach in the wall through which others will feel entitles to pass. The knock-on effect nonetheless can go the other way:

The change in Senegal in 2012, and the decision by the departing President in Mozambique at the beginning of March 2014 to step down is a signal to act in order to obtain the right conditions to underpin change elsewhere – starting with Burkina, Burundi and Togo. And in other countries where this movement throws into stark evidence other issues (such as biometrics, freedom to demonstrate, and independence of constitutional commissions…) Europe was caught off guard by the Arab revolutions. Europe would betray its hidden interests and true values if it chose to turn a blind eye to the lack of change in these archaic regimes in sub-Saharan Africa.

In order to ensure that this change has meaning, it must be given substance. Of course it is for each country to determine the course of its own history, based on its culture and creative imagination.

However, some measures can ensure that change really does become the vessel for democracy: budgetary transparency of public expenditure, contracts with multinational companies and revenue from sale of natural resources; respecting republican values when making nominations for military and law and order positions; freedom of opinion, press and to demonstrate with only an obligation to notify the authorities of the event; nomination of magistrates free of political involvement…

Together, we, citizens of Africa and Europe, thinkers, artists, activists, journalists, religious leaders, associations, unions, are joining forces to turn the page on authoritarian regimes and set the groundwork for true democracy in Africa. We share the common values of democracy and non-violence, we are determined to bring alive the conditions required to rally citizens in the name of democratic change, in all sub-Saharan African countries. The future of Africa depends on it.